Amplify Energy owns and operates the pipeline that spilled 126,000 gallons along 6 miles of the California coast, from Newport Beach to Huntington Beach.

To date, the largest spill from offshore operations in California was the 1969 80,000 barrel (~336,000 gallons) Santa Barbara spill. After the 1969 event, state and local officials worked closely with oil and gas operators to reduce the risk offshore oil spills.

The 2021 oil spill story is still developing; however Amplify has sent a remotely operated vehicle to investigate the spill. There is also other speculation about the source and cause of the spill. The map on the left below shows the pipeline from the Beta Pump Station to the offshore platforms. The map on the right is the number of vessels waiting offshore. 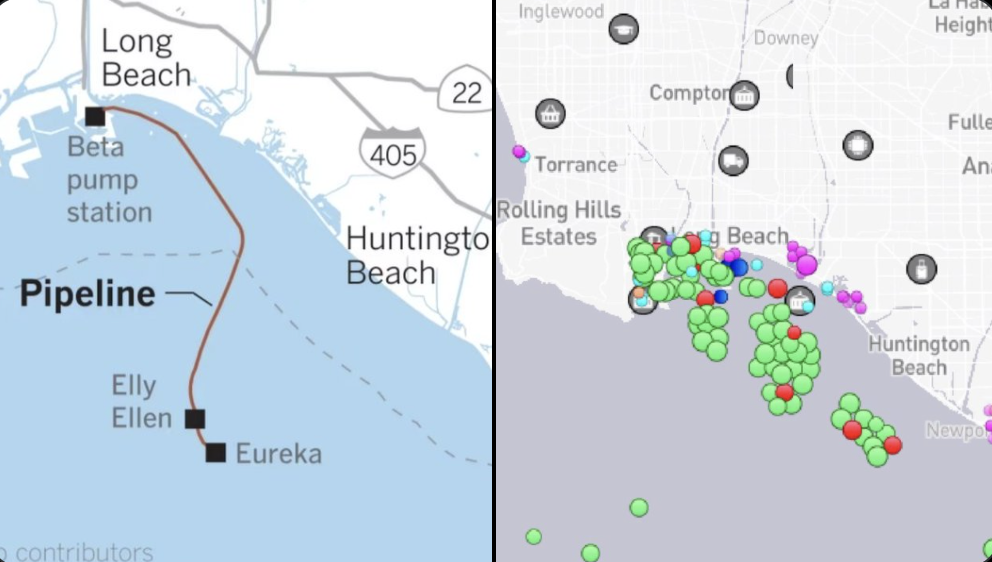 The Pacific OCS Region also conducts an offshore pipeline inspection program that includes several types of regular inspections. Operators are required to conduct weekly inspections by boat or aircraft of the ocean surface along the pipeline route for leakage. The records of these inspections must be submitted
annually to the MMS.

Increasing public transparency is key. With weekly reporting requirements, these reports should be made available on a weekly or monthly basis. An annual report does nothing to improve public trust and awareness.

Third-party inspections that are publicly reported would demonstrate the regulators and oil & gas operators efforts to protect the environment while producing offshore. The organizations are doing a disservice to their companies, shareholders, and community by not disclosing their environmental efforts on a frequent basis.

The BSEE provides oil spill response support with tools for companies and the public.

The Bureau investigates Spills ≥ 50 Barrels incidents, petroleum or other toxic substance spills of 50 bbl (2,100 gal) or more, describing the circumstances surrounding the incident with the ultimate goal of prevention through safety alerts in addition to site specific corrections. Most incidents involve everyday operations and duties, but an unsafe act or condition may cause a spill to occur. By providing brief descriptions of each pollution incident, the Bureau is trying to prevent similar incidents from occurring in the future.

The BSEE Spills Archive shows only a few other only spills for the Pacific Region from 1964 to 2006.

www.business-standard.com
Just last week, Adani Group Chairman Gautam Adani had announced that the Group would invest over $ 20 billion across the next 10 years in...
#solar #wind

www.marketscreener.com
Metacon has completed the acquisition of the associated company Water2H2 AB. Metacon has already held 20% of the shares in Water2H2 and h...
#water

theogm.com
Enbridge Inc. announces that it has entered into a definitive purchase agreement with EnCap Flatrock Midstream to acquire Moda Midstream ...
#oil
View other issues