PINEDALE, Wyo., Jan. 17, 2023 /PRNewswire/ -- Raven SR Inc. (Raven SR), a renewable fuels company, today announced it has sign a memorandum of understanding (MOU) to supply sustainable aviation fuel (SAF) to All Nippon Airways (ANA) for major global routes.The MOU provides for an initial 50,000 tons of SAF supply in the first year, 2025, with annual incremental increases to 200,000 tons for year 10. The supply will be produced by Raven SR at facilities planned for major global markets outside Japan to serve specific international routes of ANA. 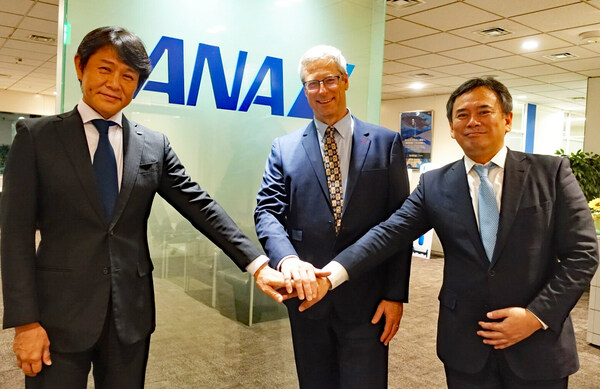 "We are grateful our strategic partner Itochu introduced us to ANA to initiate this landmark agreement for long-term SAF supplies that will foster growth for Raven SR on a global basis and help ANA with its carbon reduction commitments," said Matt Murdock, CEO of Raven SR. "We expect that our agreement with ANA to supply SAF in strategic markets globally will enable buying local fuel produced from local waste. We see growing interest in such efficiency and circularity in renewable fuel distribution for aviation and other transportation sectors."

ITOCHU is one of several strategic investors in privately held Raven SR, and the two companies maintain a strong partnership, including plans for commercial production and sales of renewable fuels worldwide.By converting various types of local waste, such as green waste, municipal solid waste, organic waste, and methane from municipal solid waste, into clean fuels, Raven SR offers a sustainable solution for the reliable and long-term production of SAF.

"As part of our climate transition strategies, ANA is dedicated to being an industry leader with our environmental commitments. This announcement with ITOCHU and Raven SR will be of great importance and support our mid- and long-term carbon reduction goals," said Hideo Miyake, Executive Vice President at ANA overseeing Procurement. "We look forward to collaboratively working together on this important business imperative of being environmentally conscious and developing local solutions that are beneficial to reducing our carbon footprint."

Global SAF supply currently comprises 0.03% of total jet fuel consumption due to a limited supply of feedstock like used cooking oils and tallow.

Raven SR plans to commence commercial production of SAF by 2025 in California, and expand SAF production by 200,000 tons/year until 2034 in the U.S. and Europe. Raven SR's use of waste as feedstock for its SAF production is expected to stabilize both the supply and pricing of SAF.

Additionally, the third-generation synthetic SAF produced using Raven SR's proprietary technology is projected to reduce CO2 emissions compared to conventional jet fuel and extend the lifespan of jet engines.Third-generation (SAF) refers to synthetic aviation fuels that are produced from non-traditional feedstocks, such as agricultural waste, forestry residues, and algae. These feedstocks are considered to be more sustainable and environmentally preferable than traditional feedstocks, such as fossil fuels, as they do not contribute to greenhouse gas emissions or deplete finite resources.

Third-generation SAFs also have the potential to significantly reduce the carbon footprint of the aviation industry, as they emit significantly lower levels of GHGs during fuel production and use process compared to fossil fuels.The Raven SR technology is a non-combustion thermal, chemical reductive process that converts organic waste and landfill gas to hydrogen and Fischer-Tropsch synthetic fuels. Unlike other hydrogen production technologies, its Steam/CO2 Reformation does not require fresh water as a feedstock.

The process is more efficient than conventional hydrogen production and can deliver fuel with low to negative carbon intensity. Additionally, Raven SR's goal is to generate as much of its own power onsite as possible to reduce reliance on the power grid and be independent of the grid. Its modular design provides a scalable means to locally produce renewable hydrogen and synthetic liquid fuels from local waste.

Founded in 1952 with just two helicopters, All Nippon Airways (ANA) has grown to become the largest airline in Japan. ANA HOLDINGS Inc. (ANA HD) was established in 2013 as the largest airline group holding company in Japan, comprising 69 companies including ANA and Peach Aviation, the leading LCC in Japan.ANA is a launch customer and the largest operator of the Boeing 787 Dreamliner, making ANA HD the biggest Dreamliner owner in the world. A member of Star Alliance since 1999, ANA has joint venture agreements with United Airlines, Lufthansa German Airlines, Swiss International Airlines and Austrian Airlines - giving it a truly global presence.The airline's legacy of superior service has helped it earn SKYTRAX's respected 5-Star rating every year since 2013, with ANA being the only Japanese airline to win this prestigious designation for 10 consecutive years. ANA also has been recognized by Air Transport World as "Airline of the Year" three times (2007, 2013 and 2018); it is one of only a select few airlines to win this prominent award multiple times.In 2021, ANA was awarded the 5-star COVID-19 safety rating by SKYTRAX, recognizing the airline's initiatives to provide a safe, clean and hygienic environment at airports and aboard aircraft, embodied in the ANA Care Promise.ANA is the only company in the aviation industry to receive the Gold Class distinction from the 2022 S&P Global Sustainability Awards and ANA HD has been selected as a member of the Dow Jones Sustainability World Index list for the sixth consecutive year and the Dow Jones Sustainability Asia Pacific Index list for the seventh consecutive year.For more information, please refer to the following link:https://www.ana.co.jp/group/en/

The history of ITOCHU Corporation dates back to 1858 when the Company's founder Chubei Itoh commenced linen trading operations. Since then, ITOCHU has evolved and grown over 160 years. With approximately 100 bases in 62 countries, ITOCHU, one of the leading sogo shosha, is engaging in domestic trading, import/export, and overseas trading of various products such as textile, machinery, metals, minerals, energy, chemicals, food, general products, realty, information and communications technology, and finance, as well as business investment in Japan and overseas.